I have a 13 year old gelding that developed sarcoid relatively early on his face.  First it was just this little spot without hair and tough skin. Everybody knew better and had something to put on that spot. Later I refused to put anything on, it caused more harm than it did good. I showed it to our vet here and he told me it is bacterial. It just got worse, then I send a picture to my previous vet when I still lived in Windhoek.  He immediately told me its sarcoid and we should cut it out. In the meantime I went onto the internet to learn more about this and came across your website. I ordered 2 tubs of your sarcoid salve.  I told the vet about your product and that I ordered it. He told me that there aren’t any really reliable cures for sarcoid and if this works, he will be glad. They use the Cortison treatment which I refused. My horse had the op, the vet could not take everything out, due to the little skin there is in that area. After the op it looked ok for maybe 3 weeks, then It started growing again, but more vicious. I started with your salve by then, but my horse was standing on the farm, he didn’t come to the house every day, and there were lots of flies, and we have a very aggressive sun. I tried to put a modified fly mask on, that lasted exactly an hour then it was off. I emailed the vet another picture about 3 month after the op. He told me there is nothing I can do, if it gets worse and effects the nerves of his face, I even had to think about putting my horse down. Naturally I was devastated!!!

I just continued putting your salve under that tumor and in its folds, the top I left, because my horse kept scratching that and just made it worse.  Eventually it started getting smaller and falling off as described on your website. I couldn’t believe it. Now I can even ride my horse again, I am ecstatic about the outcome!!  I took a picture of it now, and it looks wonderful with the hair growing back. I have told a few people here about your salve that have the same problem. I also told the vet about the great development. 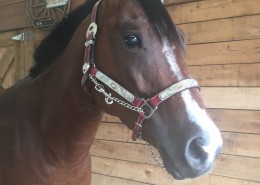 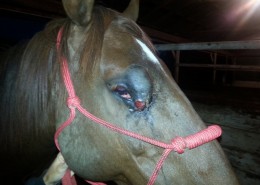 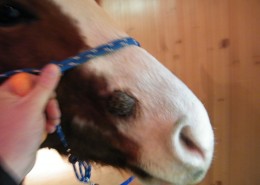